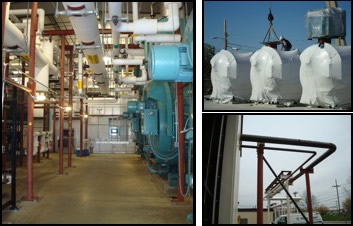 In an effort to separate and privatize the steam plants serving the U.S. Army and National Cancer Institute located at Fort Detrick, Maryland, the National Cancer Institute and the U.S. Army sought to build two new steam plants at the Ft. Detrick base. This privatization allows the plants to have independent operations and maintain full control of their steam service. This project involved the construction of two new boiler plants comprised under two separate prefabricated buildings, one 60'x70' the second 60'x90', which houses four (400-500) BHP Cleaver-Brooks boilers, respectively, as well as associated equipment.

In our role as the design/build prime mechanical contractor, Poole and Kent was responsible for the design and construction of the two boiler plants totaling 9,600 square feet of building space. Poole and Kent self-performed the mechanical and plumbing piping for this project and was responsible for the installation of the deaerators, surge tanks, heat exchangers, water softeners, chemical feed tanks, uninterruptable power supplies, and rooftop units for boiler makeup air. This work also included the rerouting of an extensive distribution piping system that serves all the buildings for the National Cancer Institute located at Ft. Detrick.

The new NCI Steam Plants separate the NCI campus system from the existing Army steam plant. This separation of the two steam systems required Poole and Kent to re-pipe the entire piping systems in both buildings. It was necessary for Poole and Kent to perform the start-up of the new steam plants without interruption of the Army's existing steam plant operations. This was accomplished through Poole and Kent's heavy coordination with both Army and NCI facilities staff located at the Ft. Detrick base.

"Poole and Kent has exceeded all expectations on this project and I sincerely hope that we benefit from your expertise in the future on other projects."